Your Knife Has Enemies!

Your pocketknife is a technological wonder incorporating thousands of years of metallurgical and material science and a lifetime of maker's experience.

Unfortunately, your EDC companion also comes with a long list of enemies dedicated to destroying it. Let's run down this list of knife enemies and talk about how to avoid or combat them to prolong the lifespan of your knife, its edge, and its looks for the rest of your life!

The archenemy of knives everywhere is the hard surface against which you bang the edge of your knife.  Typically this enemy comes in the form of a dinner plate. It might seem shocking because plates seem so fragile, but the glass coating and ceramic of your dinner plate is much harder than the steel matrix of your knife blade.  One drag of the edge against your plate and the very fine apex of your knife's blade will deform (at best) or (chip at worst).  In either case, the edge on your knife that should have survived thousands of cuts through rope or cardboard is instantly dull. It doesn't have to be a plate that damages your knife blade - any sufficiently hard object can damage your edge.  This includes cast iron pipes, anodized aluminum surfaces, concrete, tile, and granite countertops. Granite countertops are hard enough to damage a knife edge

To avoid edge damage or chipping make sure anytime you cut, you are either clear of hard objects you could slam your blade into, or that you are cutting against a soft backer like a plastic or wooden cutting board.  Also, avoid cutting an object against the ground where your blade could collide with rocks under the soil, causing edge damage.

You know better than to pry that staple out with your knife tip, but the temptation is strong.  One removed staple later and your knife looks like this!

Your knife was designed very carefully to withstand incredibly high forces in the cutting direction, but is weaker by orders of magnitude when forces act sideways to the blade, particularly near the tip where it is thinnest.

The best way to avoid the temptation to use your knife as a prybar or screwdriver is to carry a mini prybar!!  Consider an option in titanium or stainless steel.

Carry a Prybar to avoid using knife and damaging it

You can even opt for a prybar that includes a bit driver so that you have a screwdriver at the ready whenever you need it.

The scariest seven words for any knife lover are: Hey buddy, can I borrow your knife? 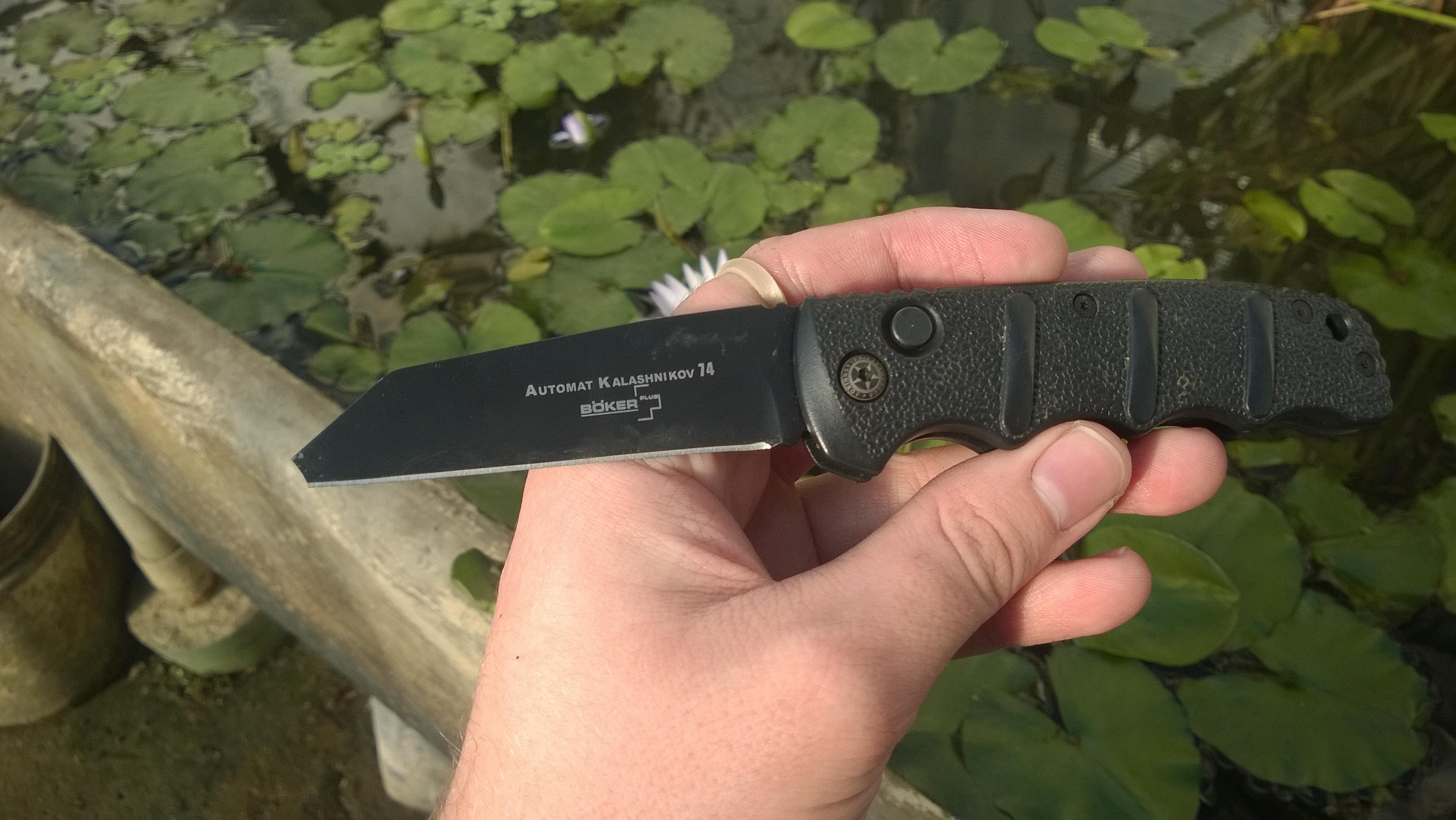 This guy lent his friend a knife, only to receive it back looking like this (Source: Reddit)

The unfortunate truth is that non knife people are incredibly likely to use a knife inappropriately as a tool and to do it serious damage.  Consider carrying a small, and inexpensive swiss army knife to use as a loaner for friends in need of a knife.

These knives are easily replaced, but are still super high quality and take up almost no pocket space.  The Cadet is a great option that also includes small tools that reduce the temptation to use the blade inapproriately.  Take it from us, carry a loaner and save money and a friendship!! Abrasive substances are the enemy of edge retention. Modern supersteels are very good at holding up against abrasives in cutting, but nothing changes the fact that abrasives are very hard on edges. Some of the most abrasive items you can cut are things like cardboard, which tends to have hard particles embedded in it, wood with dirt embedded, sod, bags containing cement, etc.  Of course if you do chooose to cut abrasive materials on a regular basis, be prepared to sharpen frequently with a non-motorized tool!

If your knife features a non-stainless, or semi-stainless steel, it's not going to rust on its own.  Steel rusts when exposed to electrolytic fluids, which help to accelerate rust, both by acting as a catalyst for the reaction between oxygen and iron and by creating galvanic potential across the surface of the steel.  That's why salt water is known for accelerating rust so rapidly. Knife Blade with rust damage caused by exposure to sweat.

To avoid rust damage to your knife blade, wipe it down frequently with a corrrosion inhibitor - we recommend KPL products.  Our knife oils both create a waterproof layer on steel, and include corrosion inhibitors that prevent rust where it starts by bonding to the steel surface and excluding oxygen, moisture, and acids. Friction (rubbing) of knife components together results in wearing of your knife parts and eventual breakdown. Theft is hard to prevent, but you can avoid losing your knife! Purchase a dedicated knife storage box so you can keep your collection all in one place!!